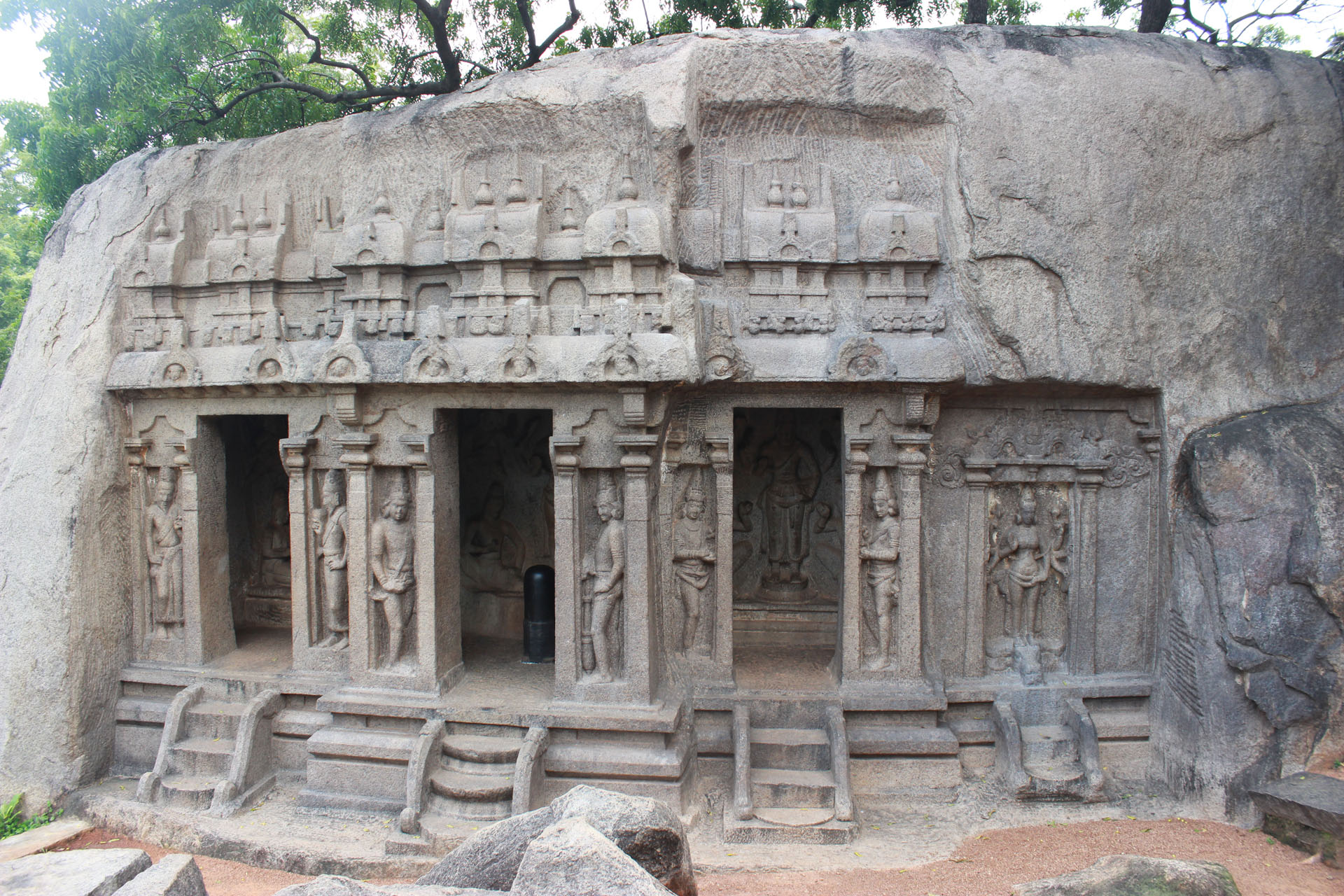 Its again a weekend. On a casual chat with a Mr.Jaykumar, landed up with the plan of tracing the excavations of rock cut cave temples of the pallavas. My first heritage trip after I becoming proud owner of Canon Kiss X5. Started on early hours of Saturday from home and joined the Jaykumar at thiruvanmayur.. and the list of places we visited as below: This cave temple called as Atiranachanda-Pallavesvara graham is cut on the sloping eastern face of a solitary low rock in the present hamlet of Saluvankuppam located towards the north of Mahabalipuram.
2. Yali mandapam (Saluvankuppam – Mamallapuram) This excavation is more than a rock-cut pavilion of a peculiarly ornamental type than a shrine. This is just an oblong pavilion closed on three sides cut out of the front face of a convenient boulder facing the sea.
3. Kotikal mandapam ( Mamallapuram) This excavation is at the north-west extremity of the main hill at Mamallapuram, at which point it is of very low height.
4. Trimurti cave temple ( Mamallapuram) This cave temple in worship, on the western side of the northern end of the main hill of Mamallapuram.
6. Orukal mandapam (Thirukazhukundram)

The rock cut cave temple here is called as Orukal mandapam – an excavation at the base of the vertical sharp of the rock on the eastern side of the Thirukazhukundram hill of Vedagiriswarar temple
7. Mahendra cave (Vallam)

The three cave temples on the eastern face of the hillock. The caves are excavated at three slightly different heights.

The upper most cave temple, the largest among the three called as Vasanteswaram cave temple. The third excavation at this hillock, slightly at a lower level from the top and to the north of the other two temples known as Northern(Vishnu) cave temple. The rock cut singaperumal kovil in the village of same name called as Narasinga vinnagaram. This cave temple itself a small one, excavated almost into the vertical scarp on the easter face of the low rock.
9. Singavaram

The rock cut cave temple of Sri Ranganathaswami in Singavaram village is expected to be the large excavation on the eastern face of a large boulder perched on the top of the low hill in the village.

Here the main figure of Lord Vishnu extends from end to end of the cave, relining on the colils of a huge sesha with a large hood showing five heads in its spread.

The association of the niche of Godess Durga on the rock-face immediately to the north of the cave temple with Lord Vishnu, recalls Mahishamardini cave.
10. Aragandanallur

The incomplete rock-cut cave temple, is on the eastern scarp of the large rock in the village, on the top of which stands the gopuram and the stone enclosure of the Oppuruvarumillada Nayanar and Ponniyamman temples. This pond has become sacred after Panjali of the Pandavas took bath.
11. Lakshita’s cave temple (Mandagapattu)

This cave temple forms the first series of caves excavated by Mahendravarman- I which is brickless, timberless, metalless and mortarless mansion of Lakshita.

This cave is excavated on the northern face of the large rock overlooking the irrigation tank of the west of Mandagapattu village.
12. Dalavanur The rock cut cave temple called Sikhari-Pallavesvaram is an excavation of the simpler type; as it consists on of a cell with a mandapa in front.

It’s almost Sunday sun-set and we close here with sweet memories of the undiscovered history and future plans of exploring the rest cave temples. Kudos to the team